New FDA report shows big drop in livestock antibiotic sales/distribution; pork industry joins diverse group to issue stewardship framework
America’s 60,000 pig farmers and their veterinarians are ending 2018 with recognition of their diligence to use medically important antibiotics in a strictly responsible way. The U.S. Food and Drug Administration’s newly published Annual Summary Report on Antimicrobials Sold or Distributed for Use in Food-Producing Animals cites 2017 data that shows a 33 percent decline in this most critical class of antibiotics intended for use in food animals. When added to the decline found in the 2016 data, it confirms a reduction of 43 percent in this class of antibiotics from the 2015 level. 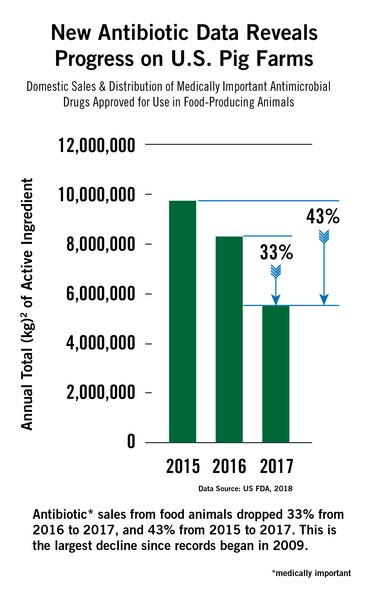 “This report is another indicator of the hard work that my fellow pig farmers have been doing to reduce the need for antibiotics. We continue to work closely with our veterinarians to ensure that we use antibiotics responsibly and according to FDA-approved labels,” said National Pork Board President Steve Rommereim, a pig farmer from Alcester, South Dakota. “We’re committed to using antibiotics in a strategic way that focuses on animal health and well-being, as well as to protecting overall public health.”

Veterinarian Dave Pyburn, senior vice president of science and technology at the National Pork Board, says that while the new report is not a perfect estimate of antibiotic use at the farm level, it clearly shows a downward trend in antibiotic use intended for food animals. He also notes that this latest data reflects what happened after the pork industry’s successful implementation in January 2017 of the Veterinary Feed Directive, which banned the use of medically important antibiotics for growth-promotion use.

“It was a relatively smooth transition after the Veterinary Feed Directives went into effect,” Pyburn said. “Thanks to well-planned and well-executed education programs implemented by the pork industry long before that date, producers, veterinarians and allied industry personnel were prepared to modify their procedures. This was a clear example of how the pork industry adapts to do their part in protecting antibiotics for human and animal health. It’s simply the right thing to do.”

The FDA report shows that the overall usage of antibiotics in livestock is the lowest since the report began in 2009. According to the USDA’s National Agricultural Statistics reports, America’s pig farmers produced over 121 million market hogs in 2017 at an average weight of 282 pounds. This is an increase of 16 pounds per pig since 2009, when production stood at roughly 113 million market hogs. Comparing these figures indicates that today’s pig farmers are using far less antibiotics per pound of pork produced than ever before.

“When viewing this data with a scientific lens, I clearly see that America’s pig farmers are on the right track in their antibiotic stewardship,” said public health veterinarian Heather Fowler, director of producer and public health with the National Pork Board. “The industry is not complacent either. We’re proud of our ongoing collaboration with some of the best researchers in the world develop antibiotic on-farm metrics. We are working with diverse stakeholders to continually improve antibiotic stewardship for the health of people, pigs and the planet.”

As an example of this cooperative approach to antibiotic stewardship, the National Pork Board, along with the National Pork Producers Council, recently announced a partnership with the Farm Foundation, The Pew Charitable Trusts and many others to introduce a comprehensive framework to strengthen antibiotic stewardship to protect animal and public health. The stakeholders agree that the use of medically important antibiotics in all settings, from human health care to livestock production, must be carefully managed to slow the emergence of resistant bacteria and preserve the effectiveness of vital drugs. The framework defines effective stewardship, outlines its core components and describes essential characteristics of effective stewardship programs, including key performance measures.

“There is a broad consensus across the food animal industry that we must continue to drive and demonstrate antibiotic stewardship in animal agriculture,” said Joe Swedberg, chairman of the board of Farm Foundation. “This framework is about stakeholders coming together to do the right thing and to communicate their commitment to antibiotic stewardship with a transparent and meaningful approach.”

The 15 core components of the antibiotic stewardship framework are based on the importance of veterinary guidance and partnership, disease prevention strategies and optimal treatment approaches, as well as effective record keeping and a culture of continuous improvement and commitment to antibiotic stewardship. The components address education, implementation and evaluation steps for phasing in stewardship programs. The framework’s guiding principles are intended to help ensure that stewardship programs have a clear scientific basis, are transparent, minimize the risk of unintended consequences, encourage alternatives to antibiotics and focus on long-term sustainability.

Rommereim says the Pork Checkoff is on their right path forward to make additional progress on antibiotic stewardship.

“We will make continuous improvement in antibiotic stewardship through additional Checkoff-funded antibiotic research and collaboration with those who share our objectives to protect animal and public health,” Rommereim said. “We can make the U.S. pork industry even more sustainable into the future.”