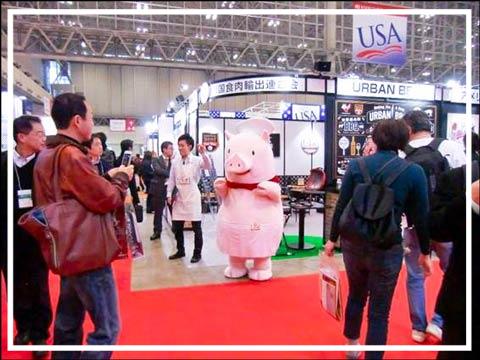 Introducing Japanese customers to new cooking methods for U.S. pork and beef, USMEF participated in the Supermarket Trade Show, one of the largest food industry exhibitions in Japan. Funded by the USDA Market Access Program (MAP), the Pork Checkoff, the Texas Beef Council and the Beef Checkoff Program, USMEF’s efforts included a display booth inside the USA Pavilion where it handed out samples of American-style barbecue and a variety of U.S. pork and beef dishes new to the Japanese market.

More than 2,000 companies participated in the trade show, which was organized by the New Supermarket Association of Japan and attracted nearly 90,000 visitors.
“The timing of this show in late winter, along with the audience it draws, makes it an excellent venue to roll out some of our promotional plans for the year,” said Takemichi Yamashoji, USMEF director in Japan.
At the show, USMEF introduced an “American pork low-temperature cooking” concept and distributed tasting samples of “low-cooked” tonkatsu, shabu-shabu, ginger pork and pork steaks made with U.S. pork.
“Japanese consumers have a fixed perception that, for food safety reasons, pork should be cooked well-done,” said Yamashoji. “But USMEF has been promoting this new cooking method that allows consumers to fully enjoy the juiciness and tastiness of U.S. pork.
We also shared scientific data about this cooking method that dispel any concerns about safety. We feel some progress was made on this topic and being able to demonstrate these cooking methods at the Supermarket Trade Show was a big advantage.”
USMEF also used its display booth to increase awareness of “Gochipo Day,” which is the third Sunday of May, and the nationwide U.S. pork “must-buy” campaign that is being conducted through June 30.
To promote U.S. beef at the show, USMEF distributed its new “American Beef Merchandising Guidebook,” an effective merchandising tool for item development and sales strategy. Tasting samples of U.S. beef “pound steak” were shared at the USMEF booth, along with promotional materials detailing the thick-cut beef dish.
The new “American Beef Mileage Campaign” was also introduced at the show. Japanese consumers who purchase U.S. beef at supermarkets can apply for prizes with the price labels on the package, with available prizes upgraded according to the total amount of U.S. beef purchased.
“For this campaign, USMEF has developed a price label, which is mandatory to indicate the country of origin,” explained Yamashoji. “This means every supermarket selling U.S. beef in Japan can automatically participate in this campaign, and we expect that it will help increase the number of consumers purchasing U.S. beef.”
Noting that the spring and summer barbecue season will soon be arriving in Japan, USMEF included its “American Barbecue” campaign as part of the Supermarket Trade Show.
“Our research shows that barbecue is increasingly popular among Japanese consumers and has been put under an even bigger spotlight because of the recent red meat boom in Japan,” said Yamashoji. “So we shared with trade show visitors information about how thick-cut U.S. pork and beef, bone-in ribs and steaks perform as ideal barbecue items.”