For many people, preparing a whole ham is one of their go-to choices for family gatherings on Thanksgiving, Christmas and Easter. But beyond holidays, whole ham usually doesn’t make the shopping list. The Pork Checkoff recently funded a study to find and eliminate barriers that are stopping consumers from enjoying whole ham yearlong.

“Holidays and ham go hand-in-hand for most consumers,” said National Pork Board President Jan Archer, Goldsboro, North Carolina. “But with new ham innovations, there’s a real opportunity to increase sales throughout the year.”

In the study, six focus groups were held in Boston, Chicago, and Orange County, California, to gather input from both “foodies” and non-foodies. To gather more data, 1,100 consumers also completed an online survey.

The findings clearly showed that taste issues are not what is holding back non-holiday whole-ham purchases, with the protein viewed as a savored meat. Many focus group participants became animated and engaged in conversations about preparing and consuming ham. And many described the enjoyment of leftover ham as an important part of the whole-ham experience.

“What I love (about leftovers) is that late-night thing where you’re hungry and you go to the refrigerator and just get a slice of ham and eat it standing there… that is the best,” one participant said.

While enthusiastic about whole hams, consumers in the focus groups and the online surveys said that it was for the holidays. This matches whole-ham consumer consumption data from previous years, according to Patrick Fleming, director of market intelligence and innovation for the Pork Checkoff.
When asked, most respondents could not recall seeing whole hams in supermarkets outside of the typical ham holidays. They also did not recall seeing any summer ham promotions in their grocery store.

“To me, ham is a cold-weather comfort food, but I have also never thought about grilling it,” said one respondent. “Ham seems to be only available around Easter and Christmas.” 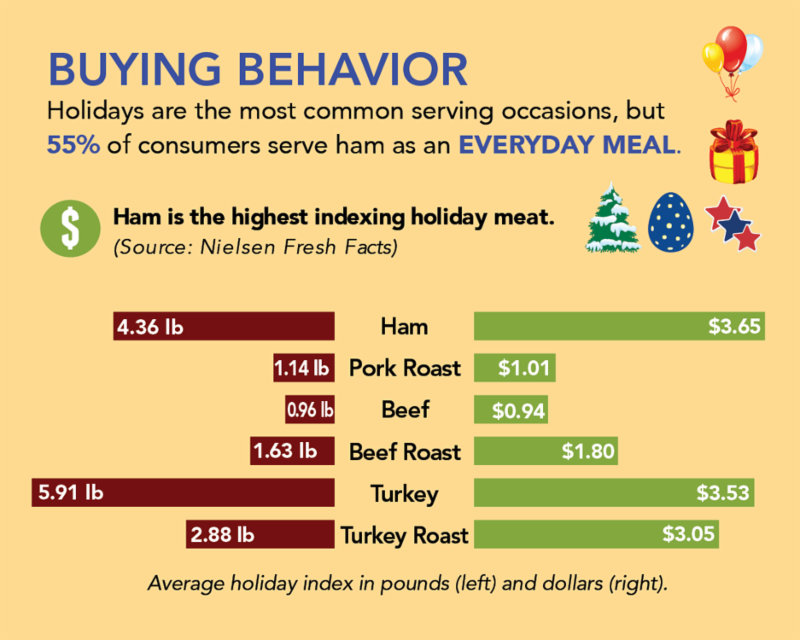 New Opportunities
“The bottom line is that the issue is not with hams, but instead is with how whole hams are marketed – or not marketed – outside of holiday seasons,” Fleming said. “When consumers don’t see it in stores, there’s an out of sight, out of mind mentality.”
The good news is that this presents new opportunities to grow the total pork category in sales and volume at the meatcase, Fleming said.
The Pork Checkoff retail marketing team has been sharing the results of the Checkoff-funded study with retailers through market insight presentations at the Pork Checkoff’s Retail Advisory Committee meetings this past year and in person at retail headquarters. Some of the insights include:
* Cooking method – Over 90 percent of consumers said baking was the No. 1 method for preparing a ham.
“Consumers need to know that they can use other preparation methods, such as grilling, barbecuing, smoking and microwaving,” Fleming said. 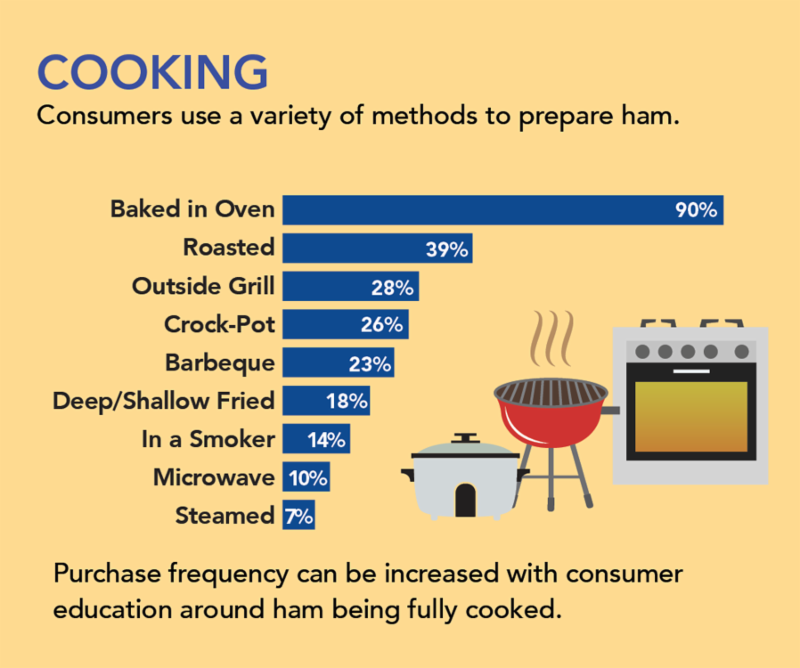 * Prep time – Respondents said that they spend a significant amount of time preparing ham, with an average time of 2.55 hours for a whole ham. And 51 percent spend three to five hours or more preparing ham.
“These results show that most consumers still think of ham as ready-to-cook,” Fleming said. “We need to share that today, whole hams are precooked, need little prep and have drastically shorter cooking times, making this protein an easy choice for everyday meals.”
* Portion size – Respondents equated preparing a whole ham with feeding a large group for holidays.
“Today’s consumers are interested in smaller portions for everyday meal planning,” Fleming said. “Several national retailers are focusing on smaller ham sizes, providing a fit for smaller households and millennial shoppers. It is encouraging to see retailers embrace new ideas in ham merchandising.”
* New flavors – Respondents were intrigued with new flavor profiles for hams, identifying sweet and spicy flavoring as the most appealing. Some of the suggested flavors included fruit flavors, sriracha, hickory, sweet and spicy, jerked, and cracked pepper.

“New ham innovations in supermarket meatcases, are helping introduce ham to a new generation of consumers,” said Sara Crawford, director of retail marketing and innovation for Pork Checkoff. “We will continue to work with our retail food partners to encourage whole-ham promotions throughout the year.” 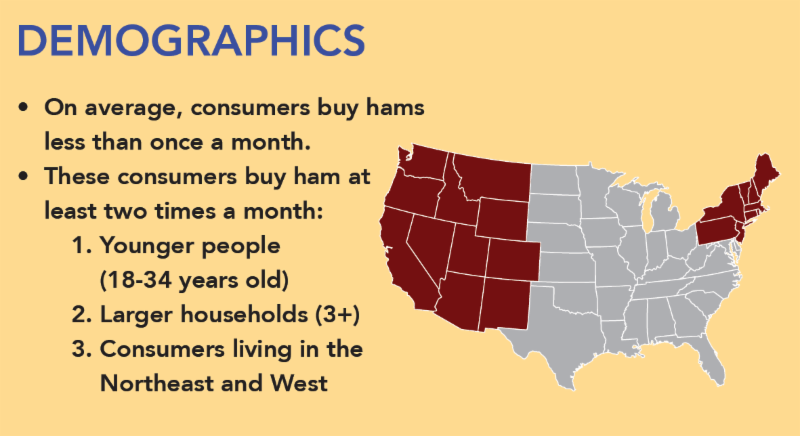