Different dilutions of disinfectant were effective at inactivating PEDV in 2 milliliters of swine feces at cold temperatures with short contact times.

It is widely accepted that contaminated livestock trailers played an integral role in the rapid spread of porcine epidemic diarrhea virus across the United States. The U.S. swine industry is an “industry on wheels” transporting millions of pigs on thousands of trucks across the country each day; therefore, PEDV-contaminated livestock trailers still pose a significant risk for disease transmission. Currently, the best option swine producers and veterinarians have for PEDV prevention is to protect their herds against the introduction of the virus by implementing strict biosecurity practices.

One biosecurity practice widely implemented across the industry to

reduce the risk of contaminated livestock trailers is to thoroughly wash, disinfect and dry the trailers either naturally or with a thermo-assisted drying and decontamination system between every load of pigs hauled. However, thoroughly washing and disinfecting a trailer in the winter months when PEDV is more prevalent is difficult.

For this reason, disinfectants commonly used in the swine industry need to be evaluated for their ability to inactivate PEDV under freezing conditions like those found in the Midwest during the winter. Therefore, the goal of our study was to test the ability of a peroxygen-based disinfectant (Virkon S) to inactivate PEDV on aluminum surfaces at 39 degrees F and 14 degrees F to determine if it can be implemented as the disinfect step of a wash, disinfect and dry trailer sanitation protocol in the winter.

Methods
We evaluated seven different treatments representing two concentrations of Virkon S (1:100 and 1:600), two contact times (10 minutes or 30 minutes) and two temperatures (39 degrees F and 14 degrees F). A negative control group and two positive control groups were also evaluated (Table 1). The disinfectants tested at 14 degrees F were prepared in a solution of 10% propylene glycol as an anti-freezing agent. We used a swine bioassay to determine if infectious PEDV remained after disinfection with Virkon S. Polymerase chain reaction detects if genetic material of the virus is present but may not distinguish if the virus is dead or alive. To determine if the virus is still alive after disinfection, a swine bioassay must be performed. Each treatment group had four replicates (one pig matched to one tray) resulting in a total of 40 pigs for the bioassay portion of our study. 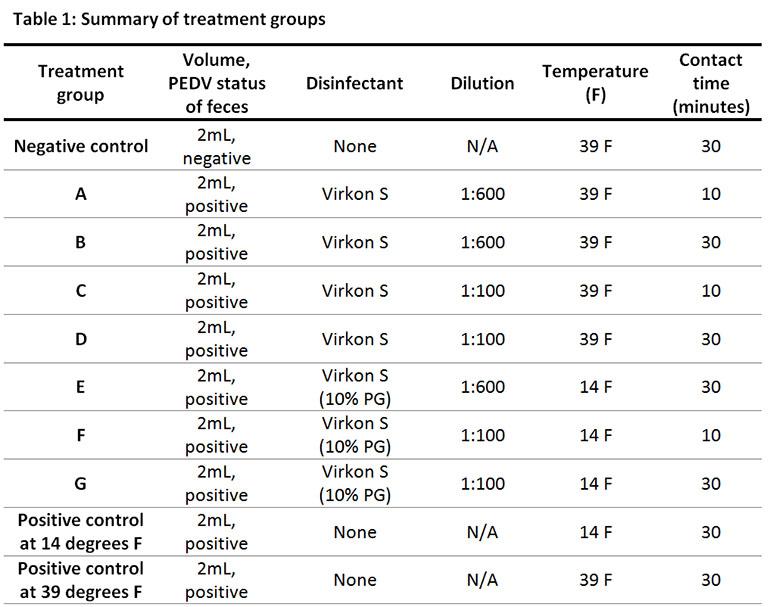 Following fecal contamination, we collected an environmental sample from each coupon and tested it for the presence of PEDV genetic material by PCR. Then, the trays were placed in a refrigerator for 30 minutes to simulate the cool temperature of feces and aluminum inside trailers during the winter. Upon completion of the pre-cooling period, the trays were removed from the fridge and then subjected to their randomly allotted disinfectant treatment as outlined in Table 1.
After applying the disinfectant with the designated amount of contact time, another environmental sample was collected from the tray and tested again for the presence of PEDV genetic material by PCR. The feces-Virkon S-propylene glycol mixture remaining in the tray was then recollected in a syringe and given orally to 3-week old barrows that had never been infected with PEDV. These pigs served as a bioassay to detect the presence of infectious PEDV in the aluminum tray after disinfection with the peroxygen-based disinfectant.
Pigs within each treatment group were housed individually in raised tubs in the same room. Each treatment group was housed in a different room to prevent cross-contamination between treatment groups. We monitored pigs daily for clinical signs consistent with PEDV. Rectal swabs were collected from each pig on three and seven days post inoculation and tested for the presence of PEDV genetic material by PCR to determine if the contents of the aluminum coupon infected the pig with PEDV.
Results
All samples from the trays, except the negative control group, were positive for PEDV by PCR both before and after treatment with Virkon S indicating that genetic material from the virus was not eliminated by the disinfectant.
None of the pigs that served as a bioassay in the negative control group were infected with PEDV. Most importantly, none of the pigs in the seven Virkon S treatment groups were infected with PEDV indicating that even though the genetic material from the virus was present, it was not infectious. The PEDV had been inactivated by the disinfectant. Pigs in the both positive control groups did become infected with PEDV as expected.
Take home message
Both the 1:100 and 1:600 dilution of Virkon S were effective at inactivating PEDV in 2 milliliters of swine feces at cold temperatures (39 degrees F and 14 degrees F) with short contact times. Additionally, the Virkon S disinfectant remained effective in the presence of low levels of feces which may help it compensate for a sub-par wash. This study also demonstrates that PEDV-positive PCR results on environmental swabs from trailers should be expected after 30 minutes of contact time with Virkon S disinfectant even if the virus has been inactivated.
Baker is a second-year veterinary student and Holtkamp is an assistant professor in the Department of Veterinary Diagnostic and Production Animal Medicine.