After many months of negotiations, South Africa finally officially opened to U.S. pork on Feb. 26. The market had been completely closed to U.S. pork since June 2013, but in previous years exporters were handcuffed by trade barriers, including regulatory restrictions related to trichinae, pseudorabies and porcine reproductive and respiratory syndrome. The most U.S. pork ever exported to South Africa was in 2006, when exports reached 731 metric tons valued at $1.3 million.

All U.S. pork muscle cuts are eligible for restricted sale, which means they must be shipped directly to approved facilities in South Africa for further processing. U.S. pork exports to the Australian and New Zealand processing sectors face similar restrictions. Certain U.S. muscle cuts are eligible for retail sale in South Africa, but these cuts must be free of visible lymph nodes and excessive connective tissue, presenting fabrication and certification challenges for U.S. slaughter and processing plants. This goes beyond the current access conditions in Australia, where U.S. pork is not permitted to be sold at retail. New Zealand allows some retail access for U.S. pork, but only in packages of 3 kilograms or less. All U.S. pork destined for South Africa, regardless of whether for retail sale or for processing, must be frozen to meet trichinae mitigation requirements. Under the recently completed agreement, U.S. pork variety meat is not eligible for export to South Africa.

“My initial impressions are that there are two immediate areas of opportunity from a demand standpoint,” Brown says. “Pork for further processing – including boneless picnics, boneless hams, boneless butts, cutting fat and back fat – seems to have growth potential. In addition, there is demand for pork feet and pork variety meat. U.S. exporters cannot capitalize on this need right now, but perhaps they will be able to in the future.”
Brown adds that South Africa’s growing modern supermarket sector is also a potential target, but this will require some investment in market development. Products such as spare ribs and loins are the most likely to gain traction at retail.
Most pork muscle cuts entering South Africa are subject to an import duty of 15% (or a minimum of $1.30 per kilogram). Ribs, which are imported at zero duty, are the exception. Although South Africa has a free trade agreement with the European Union, EU pork is still subject to the same duties South Africa imposes on pork from other suppliers.
According to USDA estimates, South Africa is the world’s 20th largest pork producer at 245,000 mt per year. It is by far the largest producer on the African continent, ranking well ahead of Angola (94,000 mt, 26th largest in the world) and Republic of Congo (25,000 mt, 32nd largest). Last year South Africa exported 13,500 mt of pork, or 5.5% of its total production, mostly to neighboring countries such as Namibia, Mozambique, Lesotho and Swaziland. 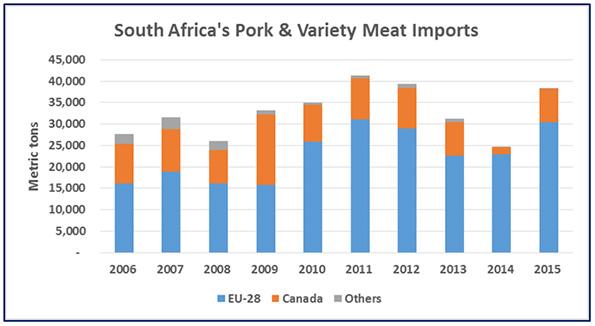 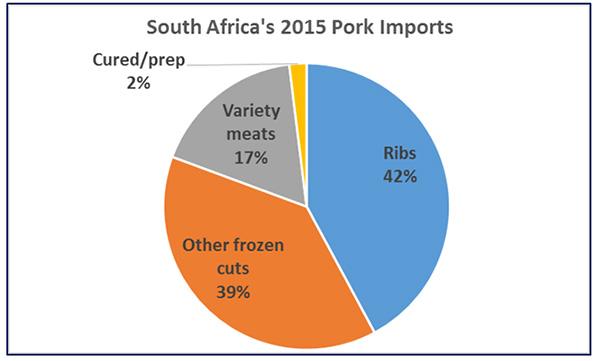 Total pork consumed in South Africa (about 270,000 mt per year) equates to roughly 5 kilograms (kg) per capita – much less than the estimated totals for both poultry (38.5 kg) and beef (18.5 kg), and only modestly higher than lamb/mutton (3.6 kg). However, per capita pork consumption stood at only 3 kg in 2000 and has increased steadily since that time, suggesting opportunities for future growth. It is difficult to estimate the degree to which South Africa’s pork consumption has been negatively impacted by its import restrictions, and thus relatively high prices, especially compared to poultry. There is no doubt that this has been a factor in limiting per capita consumption.

With U.S. pork reentering the South African market after a significant absence, displacing existing suppliers will present a challenge – especially considering the access limitations that remain in effect. However, U.S. pork has achieved success in markets with similar import restrictions – Australia, for example, is currently the seventh-largest destination for U.S. pork. While most of the U.S. export volume will likely be utilized for further processing, South Africa’s rapidly developing retail sector could also offer future opportunities for differentiating and merchandising U.S. pork cuts.