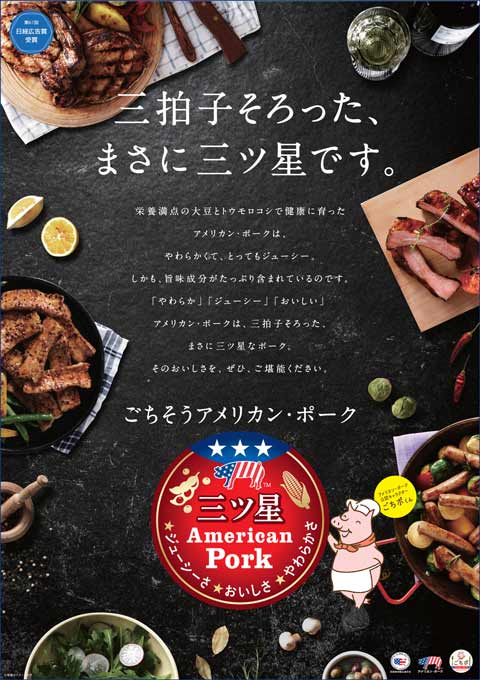 A USMEF advertising campaign that promotes the high quality of U.S. pork in Japan won accolades from the Japanese advertising industry. The “Mitsuboshi American Pork” series, featuring three newspaper ads touting the juiciness and flavor of U.S. pork, took first place honors in the Nikkei MJ Advertising Awards for 2018.
Funding for the advertising series was provided by the USDA Market Access Program (MAP) and the National Pork Board.
In Japanese, “Mitsuboshi” means “Three Star.” In the USMEF ad series, the three stars of U.S. pork are “juiciness, deliciousness and tenderness.”
“USMEF’s Mitsuboshi American Pork ad series expresses high-quality U.S. pork clearly with a combination of menus and wine,” the judging panel made up of academic and marketing experts noted in its decision. “We can sense the flow of deliciousness of U.S. pork with sophisticated use of color. And readers can feel the friendliness of ‘Gochipo,’ which is USMEF’s U.S. pork mascot. With the eye-grabbing creative and accurate message to the retail industry, this ad series reached a high degree of perfection in trade advertising.”
USMEF staff in Japan will be on hand to receive the award at a Dec. 4 ceremony.
“USMEF recognizes that the competition for the Japanese market is growing more intense and this advertising campaign is an example of our commitment to defend U.S. pork’s share,” said Dan Halstrom, USMEF president and CEO. “Although Japan is the largest value market for U.S. pork, we realize that we need to keep working very hard to maintain our relationship with the Japanese consumer to keep exports moving in the right direction.”
The three ads in the USMEF series appeared in late September in the Nikkei Marketing Journal, a Japanese publication specializing in marketing and retail businesses. The ad descriptions are provided by USMEF staff in Japan.