Lactation crate sizes evaluated in this commercial study did not influence weaned pig performance, litter size and pre-weaning mortality.
By Lori Thomas, Mike Tokach, Steve Dritz, Robert Goodband, Joel DeRouchey and Jason Woodworth, Kansas State University; and Kyle Coble and Chad Hastad, New Fashion Pork
Improvements in genetics and sow management have increased productivity goals, with pigs weaned per sow per year targeted to be more than 30 pigs in some of today’s most prolific sow herds. Not only do we have more piglets in the farrowing crate, but they remain in the farrowing crate for a longer period of time as lactation length is increased. The combination of larger litters and heavier pigs might require more space than the traditional farrowing crate configuration.
Typically, sows are housed in a crate that is 7 feet long and 5 feet wide that includes 2 feet of width for the sow and 3 feet of width for the creep area. Intuitively, lactation crates with a larger area for the piglets may increase litter weaning weight and decrease pre-weaning mortality; however, there are no published data to support this hypothesis. Therefore, we conducted a study to determine the effects of increasing farrowing crate space allowance for nursing pigs on litter performance and survivability.
The study was conducted at a commercial swine farm in southern Minnesota. The experiment was designed with three treatments where farrowing crate length was maintained at 7.4 feet and there was a constant width of 2.0 feet for each sow. The creep area width was adjusted to allow for treatments with crate widths of 4.8 (small), 5.4 (medium) and 6.0 feet (large). To create each size of crate, the divider panels were adjusted accordingly. The area provided to the sow was maintained with changes only made to the area provided to the nursing pigs.
Within a block of three consecutive crates, all treatments were represented. Sows were loaded into the individual lactation crates at random, balancing for parity across treatments.
A total of 529 litters of pigs were used in this study, allowing for 176 litters per treatment, respectively. The average parity of sows was 2.6. Cross-fostering occurred, regardless of treatment, within 24 hours of farrowing in an effort to equalize litter size across treatments. Day 1 litter weight was then obtained after cross-fostering was completed. Litter weaning weights was obtained (19.6-day-old piglets at weaning). Sows had ad libitum access to water upon entry to the farrowing house, but were limit-fed until farrowing. Creep feed was not provided during the study.
Regardless of treatment, there was no evidence for differences in the total piglets born or percentage of piglets born alive (Table 1) as expected. Litter weaning weight was 144.8, 148.6 and 144.2 pounds for the small, medium and large lactation crates, with no evidence for differences among treatments. Although there was a numerical decrease in the number of pigs weaned from the small to the large lactation crate, there were no statistical differences. Pre-weaning mortality was not influenced by crate size being 18.4, 18.9 and 20.1% for the small, medium and large lactation crate size. It is important to note that pre-weaning mortality was higher than this farm’s historical average due to an outbreak of porcine epidemic diarrhea virus 16 weeks before the study started. It is not known if this condition affected the results of this study. 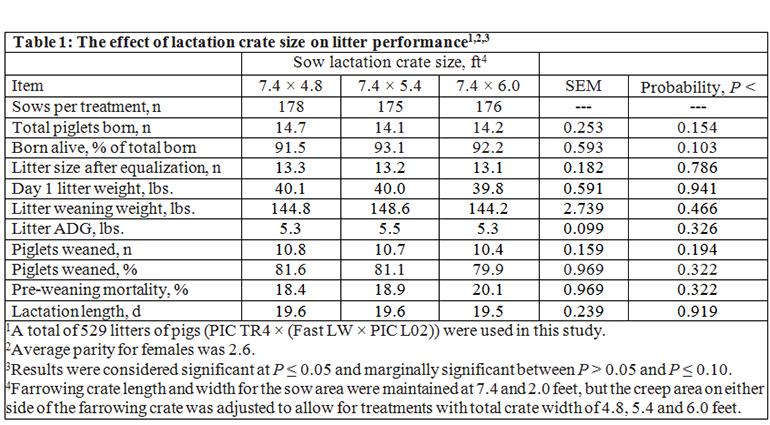