Moving pork is a top priority for pork producers and the Kansas Pork Association is leveraging its powerful online presence to help support retail sales.
Recently, HyVee grocery stores in Manhattan, Topeka, Lawrence and Kansas City featured pork shoulder roasts for $0.99 per pound. The sale was featured on the front page of Hyvee’s print circulars. To support this effort, KPA shared a picture of the print circulars on social media and promoted the post to NE Kansas residents. The print ad and social media post also included a New Year’s appetizer recipe for pulled pork nachos. The post made reached over 14,000 grocery shoppers and had over 1,400 engagements on Facebook. It also resulted in another 1,106 engagements on Instagram.
“This type of post not only supports our retail partners, but it keeps pork top of mind for Kansas grocery shoppers,” said Jodi Oleen, KPA Director of Consumer Outreach. “I like to think about it like handing out recipe cards at events. Years ago, we would pack up and work three days to hand out 2,000-3,000 recipe cards. Today, we deliver the same amount of recipes with just one social media post, while also supporting large retail programs that result in increased pork sales.” 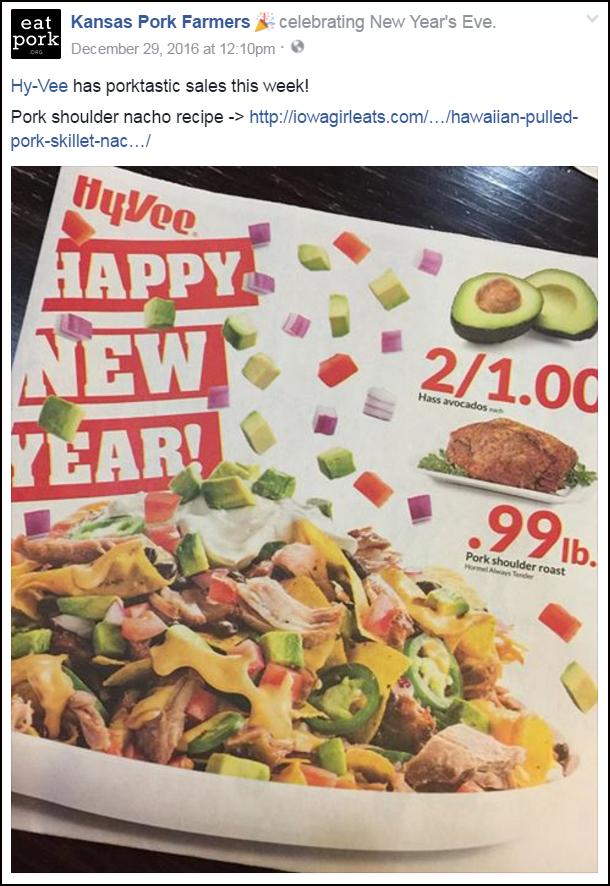