The inventory numbers in USDA’s most recent quarterly U.S. Hogs and Pigs report, released in June, suggested large fourth-quarter pork supplies but modest growth through August. While I anticipated a difficult fourth quarter, my concerns are growing due to actual marketings since July 8.

So What’s Going On and What Does It Mean?

The most palatable explanation for the additional summer slaughter is that producers heeded the advice other analysts and I offered to get current in marketing pigs. Large numbers and limited slaughter capacity will not allow market weights to be reduced this fall if prices plunge.

Anecdotal evidence indicates that producers are current in marketings. More than one packer told me in late August that his company had canceled a few loads because pigs were too light on the planned delivery date. If that was widely the case, it suggests that producers have adjusted their marketing plans.

But being that current would mean that hogs have been pulled ahead to leave space to harvest other pigs early this fall. This would reduce weights and relieve some supply pressure. Producers would have had to go deep enough into finishing barns to reduce weights significantly. Evidence of that is mixed.

Marketing Weight Down from a Year Ago

Weights of all federally inspected hogs, including cull breeding stock and lightweight hogs, have been slightly lower than last year and have followed a normal seasonal pattern. Weights of federally inspected barrows and gilts suggest producers have pulled marketings forward, with weights two pounds below year-ago levels the first three weeks of August and likely hitting a seasonal low of 204 pounds, carcass weight, the week of Aug. 20.

All things considered, I believe that we are current on marketings and likely have pulled a few hogs forward, but not enough as of Aug. 26 to explain all of this summer’s additional marketings. 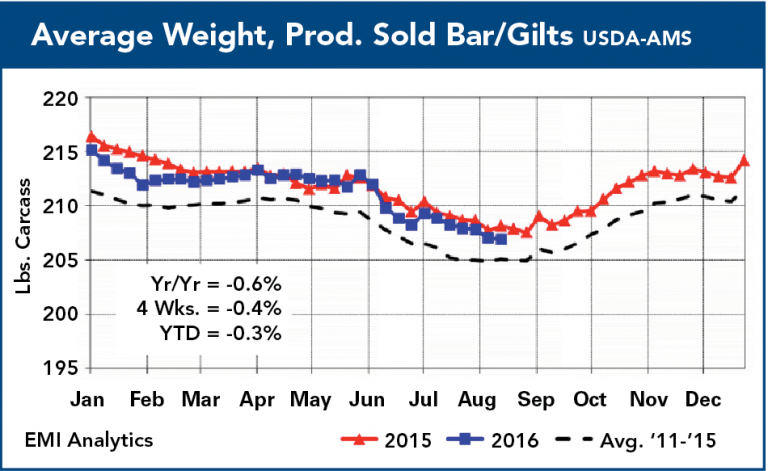 Pig Crop May Have Been Under-Estimated

The other explanation for additional marketings is that USDA’s December-through-February pig crop estimate may be low. The initial estimate in the March report was 29.582 million head, down 0.2 percent from a year earlier. USDA revises estimates depending on how the initial value compares to subsequent slaughter. The bottom chart on page 14 shows USDA’s initial estimate for each quarter and any revisions, which are usually made six months later.

The upward revisions of 2013 and 2014 were, of course, in response to larger-than-normal piglet losses caused by porcine epidemic diarrhea virus (PEDV). Since PEDV’s impact waned in 2014, USDA has under estimated the pig crop in every quarter, with four of the estimates proving to be 2.4 percent or more too low.

The most recent quarter with comparative slaughter data is September through November 2015. The initial pig crop estimate was 1.9 percent smaller than subsequent slaughter. Given slaughter since June 1, I would not be surprised by a 2 percent or so revision to the December-through-February pig crop in the September report. 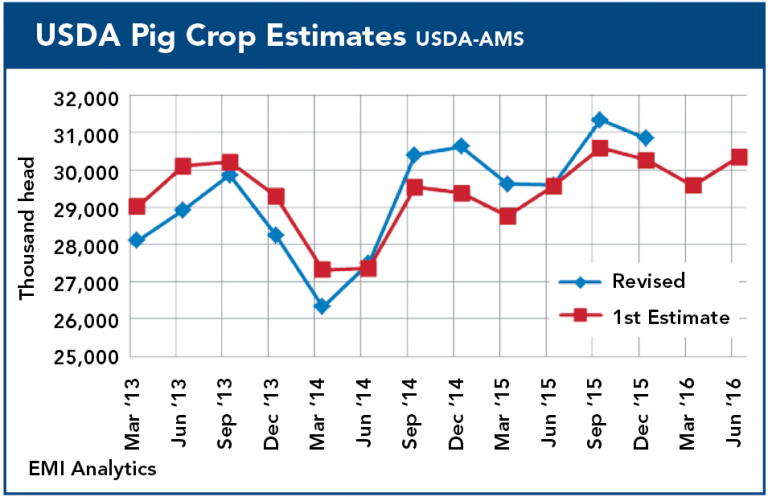 Looking at all factors, fourth-quarter 2016 slaughter likely will be up 2.7 percent from 2015. If pigs have been pulled forward, that would provide some leeway for additional hogs this fall, but there is little room for error.
U.S. pork packing capacity was 2.44 million pigs per week this spring, down from 2.46 million last year. Plant startups in Pleasant Hope, Missouri, and Windom, Minnesota, will add 6,500 head per day, or 32,000 to 35,000 weekly, pushing total capacity to 2.475 million. But I suspect the plants will be processing only around 4,000 head per day by year’s end.

And What About Pork Demand?

Real per capita expenditures (RPCE) for pork, which measures domestic pork demand, has improved sharply since 2009, gaining in five of six years and up 16 percent from 2013 to 2015. But gains have been hard to achieve in 2016, with five of six months showing year-on-year declines and the total through June down 2.5 percent from a year ago.
But 2015 RPCE values set record highs. Compared to the 2011-2015 average, 2016 pork RPCE was still up 8.1 percent through June and should be close to 2015 levels through December if the economy continues its modest improvement. That signifies stable demand at levels near the highest seen since 1990.
While export demand remains a bit shaky, largely due to the strength of the U.S. dollar, it should remain stable. Export volumes should grow slightly the rest of the year due to lower U.S. wholesale cut prices.

It’s imperative that you get current in marketings immediately. The best opportunities may have already passed, but assess the situation and try.
CME Group Lean Hogs futures for October, December and February may offer some help. Depending on your financial strength, consider taking some price protection for the fourth quarter and the first quarter of 2017. Futures prices as of Aug. 29 likely represent losses, but I believe there is considerable downside risk for the next six months that can be limited by pricing action now.
Your Pork Checkoff will increase marketing efforts as we head into fall’s large pork supplies (page 18). Ultimately, there will be new opportunities as the industry grows.
Original article Pork Checkoff
Focus on Price Protection this Fall
KPA October 6, 2016October 7, 2016 Markets