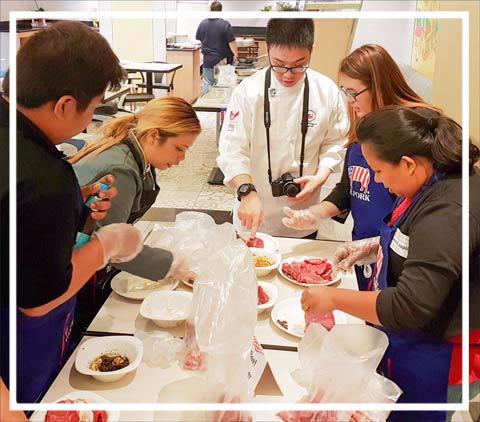 Helping importers, distributors and foodservice companies in the Philippines gain a better understanding of the value and availability of U.S. pork, beef and lamb, USMEF conducted a U.S. Meat Culinary Training Camp in Pampanga, followed by a trade seminar event in Manila. Funded by the USDA Market Access Program (MAP), the Pork Checkoff and the Beef Checkoff Program, the sessions included cooking demonstrations and educational sessions on the U.S. red meat industry.
The culinary training event was the first held in Pampanga since 2012.
“We chose the location because it is relatively close to Manila and an excellent venue for reaching out to foodservice establishments in the region,” explained Sabrina Yin, USMEF director in the ASEAN region. “Furthermore, Pampanga is known as the culinary capital of the Philippines because of its reputation for good food. Since our last culinary training camp, Pampanga has seen a rapid increase in the number of hotels and restaurants.”
Similar to the previous U.S. meat culinary camps, USMEF invited three local importers – Alternatives Food, Hightower Inc. and Vanguard Distribution and Logistics – to select sales staff and valued U.S. red meat customers to attend. The two-day culinary training was attended by a total of 31 participants. Among them were restaurant owners, chefs, and kitchen supervisors.
The camp began with Yin providing an overview of activities, followed by a presentation by USMEF Philippines representative Monica Regaspi on the U.S. beef industry, including a comparison of grass-fed and grain-fed beef.
A cooking demonstration by Chef Jose Carmelito Quizon included information on native Kapampangan cuisine and how it was influenced by colonization.
The second day of the culinary training began with a presentation on U.S. pork by USMEF chef Melvin Ho.
“The culinary camp was very successful and we were told by attendees that they appreciated the information we shared,” said Yin. “It’s important to keep existing customers engaged and informed, just as it is important to reach new and potential customers of U.S. pork and beef. I think we were able to accomplish both in this event.”
On the day following the culinary camp, USMEF teamed with USDA’s Foreign Agricultural Service (FAS) in Manila and the Association of Hotel and Restaurant Purchasing Managers of the Philippines (AHRPMP) to organize an event at the Solaire Resort and Casino in Manila.
The agenda included seminars pairing U.S. meat with California wines and a U.S. product showcase trade reception.
The event was attended by nearly 100 purchasing managers from hotels and restaurants in Manila and nearby cities. Local importers of U.S. commodities were also on hand.
“One of the main purposes of this event was to allow the importers and their sales staff to showcase U.S. products and ingredients to purchasing managers and other prospective clients,” said Yin.
U.S. pork and beef dishes were prepared at the event and sampled by participants.
Original article Oct. 13, USMEF
Culinary Camp Educates Philippine Importers, Distributors on Attributes of U.S. Pork, Beef
KPA October 23, 2017October 20, 2017 Export News